He stared out through the frosted glass

At falling flakes of white,

Distracted by the dazzling strings

He forced a smile of happiness

Despite his hidden fears.

He wished and hoped for normalcy

And tried to hold his tears.

They came back every holiday.

He had nowhere to hide.

The pale ones, whiter than the snow

With souls that hell denied.

Could never quite explain

How he could see the evil things

His mother and his father, they

And so he didn’t tell them of

The ghosts of Christmas land.

With silent steps they trudged the streets,

Feet dragging on the ground.

Their empty stares and evil glares,

While making not a sound.

A watchful canine stared and barked

He passed right through the guard dog, who

The young child gasped and stepped away.

The creatures turned their heads.

All monsters stared in unison,

The legion of the dead.

The spirits came through solid walls

The nightmares from a dream.

The child lacked breath to scream.

Each one of them went in the child,

His thoughts and feelings slipped away

The morning came on Christmas Day.

No haunts that one could see

With even steps, he walked the hall

Towards the Christmas tree.

His parents handed him a gift

Both gasped as he stared back at them

With eyes as black as night.

Posted by Jonathan D. Nichols at 10:01 PM No comments:

I finally saw the new Halloween 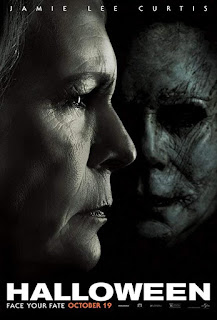 I just watched Halloween for the first time, finally. No, not the Rob Zombie one, the one with Jamie Les Curtis. No, not the 1978 movie, the new one (2018 for those of you in the future). So my first question is... why the fuck is this movie called Halloween? Not Halloween II because that I title belongs to two separate movies. What the fuck is the proper title to call this movie? And they’re making a sequel, so what are they going to call that one? Halloween III - Ignore II through Resurrection and the Rob Zombie films? These movies have a timeline fuckup worse than the X-Men movies. That being said, I decided to prepare for this movie by watching Part 1, and only part 1. The new Halloween, the movie released in 2018 by Blumhouse films, is the best Halloween I’ve seen since the original.

I’ve always had an obsession with horror movies. I’ve especially held a high regard for those movies that have generated a franchise. Hellraiser (1 through 4. Fuck the rest.). Nightmare on Elm Street, Friday the 13th, Child’s Play, etc. Halloween is the very first of the popular horror franchises that I saw from the beginning.

I remember watching it late one night when I was, like, 13. I had no idea what the story was about. When the first kill was by a ten-year-old boy, it caught my attention. Since then, I followed the movie series religiously. Laurie turned out to be Michael’s sister. She died in a car wreck and left a daughter behind. That daughter died and left behind a baby, while we learned Michael is controlled by a cult. Laurie faked her death, had another child, and decapitates Michael. She killed the wrong man, Michael kills again, and Busta Rhymes kills the franchise. Rob Zombie does whatever the fuck he wants, and the new Halloween is born.

Opening credits started the same as the original, with a slight alteration. The tone of the film, the story, the kill sequences, all of it gave the movie an overall feel that matched the original better than I ever thought it could. Good job, Blumhouse. Once again, you have done a good job. Thank you for finally fixing Halloween.
Posted by Jonathan D. Nichols at 7:10 PM No comments:

The Most Rebooted Movie Ever 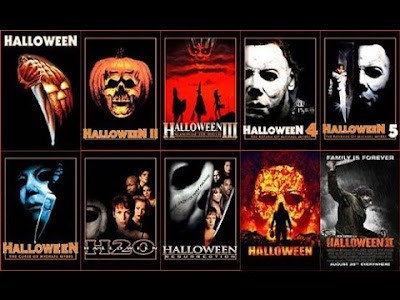 I love Halloween. The movie and the holiday. I saw the original film on TV when I was a kid late at night, and I was hooked ever since. Yeah, sure there’s the Jason movies and the Freddy movies, the Chucky movies and the Leatherface movies, 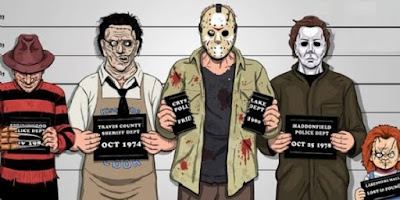 but Halloween has always stuck with me as my favorite of all the big franchise horror icons. I followed the story through each of the films as a kid. 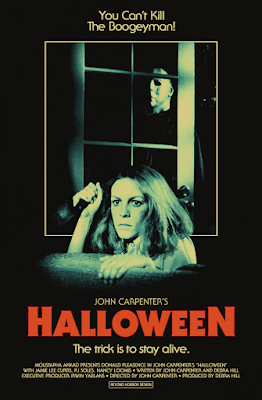 In the first film, the opening scene is a girl getting stabbed by a killer in a mask. The surprising reveal — the killer is a six-year-old boy. 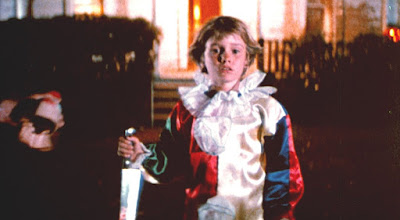 The boy is institutionalized, breaks out fifteen years later, and goes back to his home town. This is where he goes on a killing spree, stalking Laurie Strode (Jamie Lee Curtis) and killing her friends. She escapes, Michael gets shot and falls out a window, and when they look outside, he’s gone. 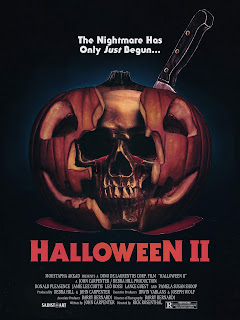 Part two is where the plot thickens. This is where some hardcore fans feel like the movie got ruined. It gives the killer a motivation. Michael Myers was initially a killer with no emotions and no purpose aside from murder. He was just an unstoppable killing machine. Turns out, Jamie Lee Curtis is his other sister, and this is why he was stalking her. So the movie picks up directly after the last one, and Michael stalks Jamie Lee Curtis in the hospital before getting shot in both of his eyes and blown up with his psychiatrist. 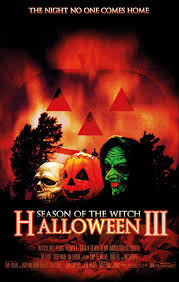 Reboot number one. Halloween III: The Season of the Witch

Michael Myers is dead. Shot twice in the head, burned up, end of story. The studios decided that Halloween was going to be an anthology series. Each new entry would be a totally different story centered around the night of Samhain. This forgettable movie (which I have seen numerous times) has an evil corporation creating Halloween masks and cursing them with a piece of Stonehenge so that it will kill the kids wearing them. Interesting idea. It has androids, it has snakes coming out of empty masks, it has a very annoying jingle, and it has no Michael Myers.

The next three are a trilogy of their own. Parts 4, 5, and 6. The Return, the Revenge, and the Curse of Michael Myers. Laurie Strode is dead. She died in a car wreck and left a daughter, Jamie Lloyd, behind. Michael Myers never died, just fell into a coma. He wakes up, goes after his niece, and we as the viewers learn about a cult that has been controlling Michael with the curse of Thorn, where somebody tries to kill all the members of his family. The final details of the cult come to fruition in part 6. Halloween: The Curse of Michael Myers, originally entitled Halloween 666: The Origin of Michael Myers. The final scene in this last film is a cliffhanger ending with ambiguity as to the whereabouts of the antagonist. 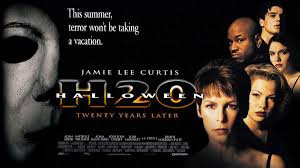 Reboot number two. Halloween H20: 20 years later.
Laurie Strode faked her death. Movies 4, 5, and 6 are ignored. This movie didn’t get a number in the title (then again, technically part 6 didn’t either). This one is the new part 3 of the series. A direct sequel to part two. Michael dies in the movie. The end. A great movie, a great finale to the series. This is the one where it should have concluded. 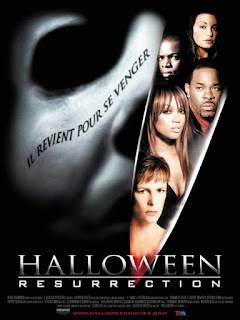 Halloween: Resurrection came next, Laurie Strode is killed in the opening scene, Michael Myers wasn’t actually killed (of course), and the worst movie in the series, even worse than part 3 was gifted to us by the money hungry studios. This one was so bad it officially killed the current continuity of the series. 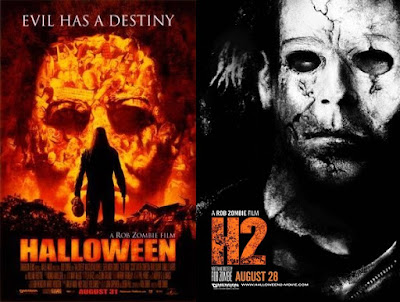 Reboot number three. Halloween (2007). Rob Zombie decided to remake Halloween in his own image. We are introduced to the white trash dysfunctional family of a young Michael Myers. The overall story is the same, with a much longer introductory scene which shows his family, his therapy sessions, how he escapes, etc. All of these details were left as mysteries in the original film. Rob Zombie’s sequel came out a couple of years later, and it was nothing worth watching. I’ve only seen 2009’s Halloween 2 once. 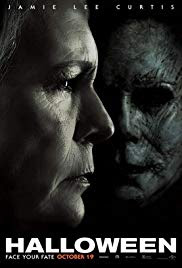 And now we come to the movie to be released this Friday. Reboot number four. Halloween (2018). Laurie Strode is not Michael Myers' sister. Part 2 never happened. Parts 4, 5, and 6 never happened. H20 and Resurrection... nope. This is a direct sequel to the original Halloween from 1978. This makes it the third “part 2” in the series. I’m not sure what to expect, but critical reception is good. I won’t see it Friday since I’m going to a haunted house that night, but maybe Saturday or Sunday. Question is, should I try to cram a re-watch of the first ten movies before then? Shouldn't we all try that? 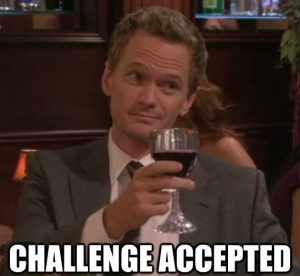 Posted by Jonathan D. Nichols at 10:31 AM No comments:

The Worst Trilogy Ever Made So I haven’t’ watched this film in quite some time, but I have watched it. Then I heard they came out with a sequel. I thought… how bad can it get? The answer, pretty damn bad. Then, a couple of years later, Deebo from Friday needed a paycheck and decided to star in part 3.

The third installment… the third ‘movie’ is one of the worst things ever made. To watch this epic trilogy, you got to have a tough stomach.

So the idea behind the premise of this film started with an idea Tom Six had about punishment for a pedophile. What if you took the child molester and stitched his mouth to the ass of a truck driver so he would be forced to eat somebody else’s shit? And that, ladies and gentlemen, is how The Human Centipede was born.

The first movie is simple enough to introduce the idea: three unsuspecting young people are kidnapped and forced into an experimental procedure. They are attached ass-to-mouth, and yes, defecation does happen.

Let me see. Waterboarding with boiling water. Eating dried African clitorises. Consumption of testicles. A whole lot of murder. Aaaaaand…. a 500 person human centipede made of prison inmates. On top of all that, this movie has the shittiest acting since Troll 2. 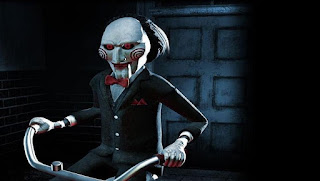 Posted by Jonathan D. Nichols at 10:59 PM No comments: